It is said that historically, primarily men played the didgeridoo. In certain parts of Australia, there are still whispers of a debate that asks whether women should be permitted to play the didge.  As I understand it, this springs from some superstitions and rumors that suggest women will loose their fertility if they play the didgeridoo particularly during sacred ceremonies. Traditions can be slow to change and in some circles a woman didge player and maker still might carry a bit of a stigma. When I first started becoming interested in this instrument, I had no idea to what extent men popularized it. Thankfully traditions that no longer serve inevitably evolve and change to reflect and serve a broader purpose. Today there are many brilliant, and recognized male and female contemporary musicians who incorporate didge sounds and rhythms into world, pop, beatbox, electronic and contra music as well as shamanic rituals and sound healing.

It is really interesting to note that in some ways the study of yoga also holds a similar legacy.

Hespero (chaparral) yucca. When the white blossoms are young and fresh, they can be eaten.

Hesperoyucca whipplei, sometimes referred to as "Our Lords Candle" or Quixote yucca.

Spiral clusters of spiny leaves make up the plant base.

To commission or purchase a one of a kind, Urban Didj didgeridoo, please contact Michele Ogilvie to discuss your interests, or check out the SHOP link to see what's available.  Sales transactions are conducted through PayPal. Shipping is arranged according to destination. 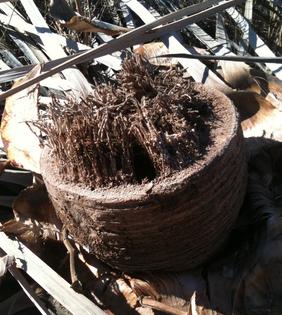 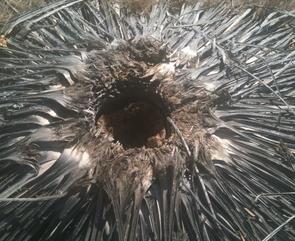 ​WHAT IS A DIDGERIDOO?

The didgeridoo, (also know as: yidaki, didgeridu, didjeridu) is deceivingly simple in its design. It is essentially a hollowed out tube.  Although it can be made out of just about anything including PVC pipe, fiberglass, ceramic, hemp, hardwood, yucca and agave, it was traditionally made from bamboo as well as termite eaten eucalyptus branches. This drone type instrument has been around for approximately 40,000 years; however, the name didgeridoo has only been around for 100 years or so, (according to "The Word Didgeridoo article"). There are many cultures throughout the world that create sound by blowing through tube like forms—yet Outback Australia is most noted for a distinct type of rhythmic drone and beat that incorporates emulations of nature such as tree frogs, dog barks, hyenas and bird sounds.​​

​When I lived in Venice, CA in 1998 as a Fine Artist and Special Projects Art Director, I was fortunate enough to be coerced by a friend into taking my first yoga class on Main Street at Yoga Works with Saul David Raye. This ended up being one of those unpredictable experiences that changed the course of my life. I had already been practicing Transcendental Meditation since high school however; it was asana, pranayama, kirtan and community that set me on the path as a spiritual seeker and holistic health practitioner.  Immediately I began to draw similarities between Yoga and Art. My visual art aesthetic began to take a radical shift.

From 1998-2004, I attended many workshops with internationally renowned teachers such as Eric Schiffmann, Aadil Palkhivala, Seane Corn, Lisa Walford, Annie Carpenter and Shiva Rea. In 2005, I completed a Yoga Works Teacher Training with Natasha Rizopoulos and Jeanne Heilman. Studying Anatomy & Movement with Ellen Head during TT inspired me to enroll in programs at the Institute of Psycho Structural Balancing in Culver City and the Shiatsu School in Santa Monica. After completing about 400 hours of instruction and training—including Anatomy/Physiology with Brian Campbell, Pathology/Orthopedics with Dr Medici and Cranial Sacral with Ellen Head, I received my California Massage Practitioner Certificate from CMTC.  During this time I was also pursuing graduate study in studio art, and earned my MFA and CA Teaching Credential in 2003.  For the following two years, I worked at Healing Hands, and Bridges to Recovery, while continuing to create art in my studio.  In 2005, I was invited to be on the Upper Division Visual Art Faculty at Brentwood School.

The first time I heard a didgeridoo and pentatonic flute I was in two different Yoga classes. Each time I was immediately seduced into the mystical sounds and wanted to learn more. I bought my first handmade flute from Jonathan Wolf. It took me forever to get a single clean note out of it, but I was not going to give up. I bought my first bamboo Didgeridoo shortly after in Cabo San Lucas from an outdoor market. I began to study the art of instrument making through resources such as Kinko Shakuhachi’s One Maker’s Approach—Blowing Zen One Breath; One Mind by Carl Abbot/Center for Taoist Thought and Fellowship; Mud to Music by Barry Hall and most importantly Flutecraft  by Mark Shepard. Through trial and error and experimentation I began to develop my own techniques using a variety of materials and processes.

The name Urban Didj Sound Paintings represents a break from tradition and is a nod to both sound and visual aesthetics, as each of these receive equal attention in my instruments. Sacred instruments such as udu drums, pentatonic flutes and didgeridoos have offered me a way to honor and express so much of what I have learned and practiced over the years about healing, yoga/pranayama and art. In yoga we seek to acknowledge the interconnections between mind, body and spirit. In art and music there is inherently the same aspiration for many of us. I am forever grateful to all of my amazing teachers in art, yoga, and in life. I am in love with these instruments and all that they behold in the making and in the playing.  I hope they will also offer you the healing potential of meditation, music and art.

fROM SEED TO SOUND

One of the hardest parts about harvesting a stick, is having to pull the needle-like, spiked leaves away from the root bulb without getting poked or stabbed. It requires patience and a good pair of thick gloves. The shape and condition of the bulb will determine where I cut it. There have been times when I have actually dug the whole bulb out. This takes a really long time and a tremendous amount of effort. The process of harvesting the stick is completed with a blessing and an offering of appreciation to mother earth.

It is the root bulb that forms the bell end of the instrument. The bell helps to amplify the sound.  Design considerations often include a bell cap carved from hardwood such as walnut or oak.  Performers will often clip an amp mic to the bell cap.

Once the seed blossom clusters of a yucca dry out, 1000's of seeds will disperse and scatter with the wind to potentially sprout into new plants, and so the cycle continues. It is amazing to think that one day, many years from now one of these little black seeds could become an instrument. 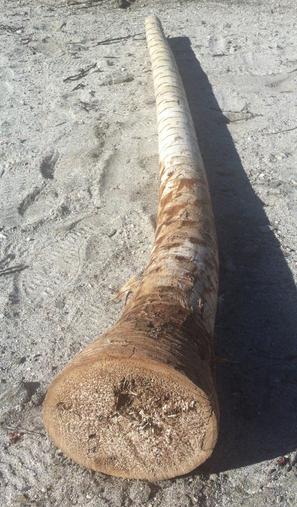 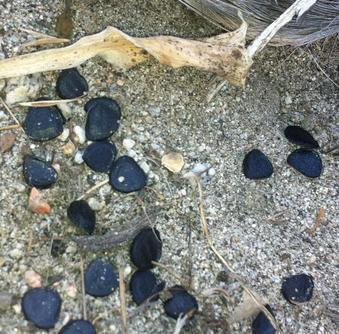 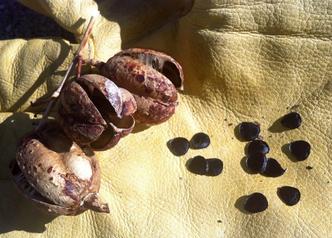 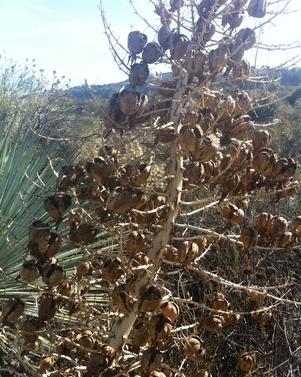 I make my instruments from Century plants. Century is the family name for literally 100's of indigenous desert plants that bloom only once in their lifetime. Agave and Yucca are among the most widely known. Agave plants generally live between 10-30 years and can sometime reach heights of up to 30 feet, whereas Yucca takes about 5 years to reach maturity and flower.

Towards the end of their lifespan a long stalk capped with white/(yucca) or yellow/(agave) blossom clusters will ascend from the base of the plant. As it reaches maturity the plant and stalk will dry out. The lifecycle will continue however, as these plants will also produce suckers or shoots from their base that will give birth to new plants. 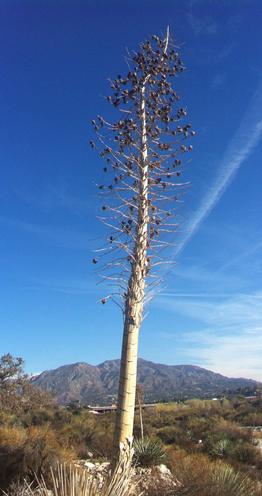 The seeds are hard, but are nutritious and can be ground into flour.